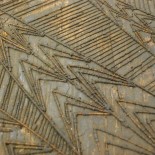 A collection of medieval manuscript leaves; custom encapsulation and album construction allowing for removal and                   handling, as well a reorganization among contents

Assisted with the organization and collection of artists materials, preparation of materials for exhibit, book display,                   mounting, and installation

A Chronological History of the Voyages and Discoveries of the South Seas or the Pacific Ocean, 1813 xfDU19B87 v.3 Re-back with CMR endsheets

University of Iowa Bulletin 1970-72 | A Soft-covered catalog in which the covers had become detached from the text block. The original staples were removed, a precision plow was used to prepare the spine for a double-fan binding. The text block                   was re-cased using tissue flanges.

The American Right Wing: University of Illinois Graduate School of Library Science | xE473 E37 1960 : soft covered                   books, originally stapled through the spine. The area around the staples had become worn and the cover separated from                   the textblock. The text was resewn as a pamphlet and attached to the cover using a tissue hinge.

Money-saver Chicken Cookbook | TX 750 R87 1976 | A hardcover book in which a significant portion of the pages had                   become separated from the cover. The textblock was double-fanned and re-cased using tissue hinges.

One Season Shattered | Washing and lining